How to live in a collective house

Evan lives in another collective house in Greensboro. He will be a regular contributor, illustrating the day-to-day life in his household. For more on how collective living works check here and here. 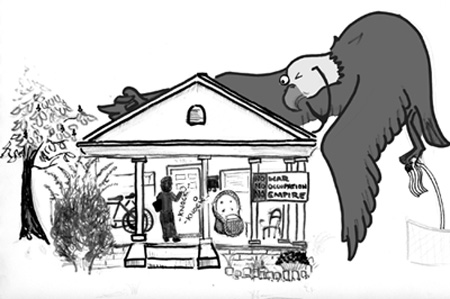 The US census recently picked our little collective house for sampling on its 2008 survey. When we first received the introductory letter, we mused about how a government observer might perceive collective living as compared to the many other houses they cataloged into neat, orderly data points throughout their day. Our lives in a collective house are often neat and orderly, but we imagine that many everyday activities we take for granted would raise an official eyebrow. So when the census taker came to our door, we reacted as any anti-authoritarian collection of people might when they are under surveillance by the watchful eye of the law. 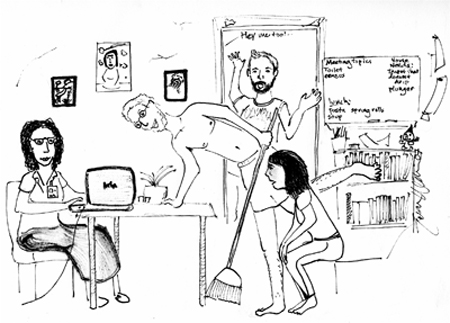 We invited her in for our house meeting! A scheduled 10 minute interview about our household’s employment status became a hour-long conversation about our lives. We started off trying to casually continue our house chores as she interviewed each of us individually but by the end we were all sitting around interjecting anecdotes or peeking at how she was recording our responses. When the official questions were over, we wanted to know about her job and all the people she met during her day. She in turn was curious about our lives and ‘what exactly was our relationship to each other anyway?’ We told her all kinds of stories about ourselves and other folks in the collectives houses in Greensboro…

A little while ago our housemate was walking her dog through the neighborhood. I was outside myself and watched her hurry the dog towards the home after overhearing a frantic conversation between two women talking on the corner. She said she heard “gun”, and so we both thought it best to go inside. Our neighborhood has had some scares with drunken frat boys and a rabid coyote but generally I felt safe and figured that the several families and older shut-ins around the block were harmless. Over the next few hours, everything changed. 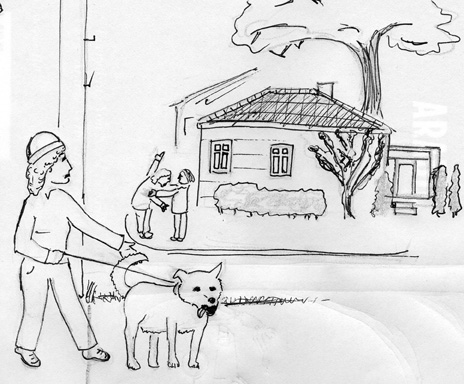 After their conversation on the corner the two women left together. All seemed calm and we came in and out of the house without incident for a little while. Suddenly, police were everywhere and our whole block was on lock down. Police cars, a SWAT vehicle and at least 20 officers on foot, all with guns drawn, descended on the neighborhood. Their attention seemed to be focused on a house further down the block, but in the process of their stakeout they went all over and around everyone’s lawns, backyards, and cars with guns at the ready. Our house was curious and several of us peeked from the window to see what was up. Suddenly one of the officers in charge, one hand never leaving his holster, jumped onto our porch and started berating us about the danger we were putting ourselves in by peeking. He went on and on about how the police department was just trying to protect us from crazies (who “might have scopes” and “could pick us off all the way down the block”) and that we didn’t know what was good for us. I felt threated far more by this blustering fellow than anyone on our block who could have taken me out at any time without the benefit of a scope as I passed by every day. I couldn’t help but feel that the neighborhood had suddenly become more unsafe and whatever potential harm had been greatly escalated by all those people with guns, regardless of who they were. As a citizen, I felt powerless to defend myself and my neighborhood against the city’s hired defenders. 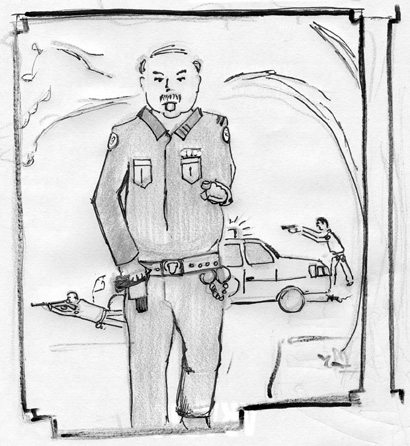 Luckily, everything ended without incident 3 hours later. All of us were exhausted from the ordeal.

3 responses to “How to live in a collective house”