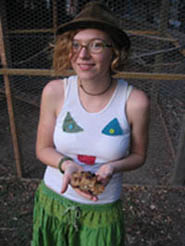 Jen showed up at Food Not Bombs today with two pans of really good bread pudding that she had made at home. Figs are in season right now in North Carolina; parks and college campuses often have ornamental fig trees as part of their landscaping, so keep your eyes peeled for urban foraging. Bread is always in season: it’s easy to find bread in dumpsters. For the freshest bread check your local bakery dumpster right after closing time.

Tear up the bread into small chunks and put in a mixing bowl. Mix in 4 cups almond or soy milk and the equivalent of 8 eggs using the egg replacer, plus ½ cup honey and 1/3 cup molasses. Add ½ cup brown sugar and cinnamon and nutmeg to taste. Stir in blueberries, figs and almonds and mix all ingredients thoroughly. Smooth mixture into a pan. Bake until it springs back when you press it, probably 30-45 minutes.

One response to “Vegan Bread Pudding”