A couple of years ago I taped some little notices up by our front and back doors. They are headed “IN CASE OF POLICE RAID” and they give instructions on what to do if the police show up and want to come inside. It felt a little strange at first, but in these post-Patriot Act, martial-law-on-demand times they seem more and more like simple household precautions, kind of like the fire extinguisher in the pantry or the smoke alarm in the upstairs hall. I put the notices up after a friend visiting from Indianapolis described the August night when the police, fire marshals, and ATF agents came into the radical bookstore/collective house where she was living and tore the place up. A national governors’ meeting was about to be held in Indianapolis; a spokesperson for the Indianapolis police department said after the raid—which 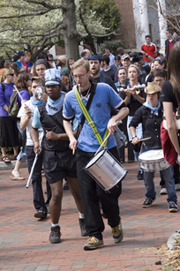 found no weapons or anything else illegal in the house–“Seattle was nearly burned to the ground and Montreal suffered millions of dollars in property damage when the WTO met there. This is the same type of anarchist group, and that simply was not going to happen here.”

Last weekend I went to a conference on the theories of Carl Jung. I didn’t know much about Jung when I began, and I’m still not anywhere close to an expert, but at least I can now say the words “animus” and “archetype” without worrying that someone will challenge me to explain what I’m talking about. The centerpiece of the conference was a paper presented by a Jungian analyst using examples drawn from the dreams of one of her clients. Her client, she explained, was about to retire after a successful professional career and had found himself confronting a long featureless emotional landscape. He experienced neither sorrow nor joy, neither terror nor ecstasy, and he wanted help.

The first dream the analyst recounted to us went like this: the dreamer approaches his home and discovers a rowdy group of strangers 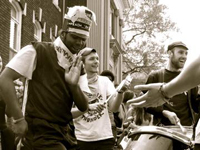 dancing and laughing on the sidewalk. He tells them to leave immediately but they refuse; one of them asks him for money. He gets angry and goes inside to call the police.

The analyst stepped away from the podium and looked out at all of us sitting with our notebooks on our knees. “Who are these strangers?” she asked.

“His emotions!” several people shouted at once.

She nodded and went on. In the second dream the strangers have made their way into the house and once again are dancing and laughing. The dreamer orders them out and after an argument they leave. They take their furniture and pictures with them and the dreamer cleans up the house until everything looks the way it was. “He and I joke about it now,” the analyst told us, “but when he brought me this dream early in treatment he thought I would be proud of the progress he had made.” Everyone in the room laughed.

The rowdy strangers kept returning, becoming more aggressive and more dangerous as time went on. And in waking life the man was getting worse. “He developed obsessive-compulsive behaviors,” the analyst told us. “He became anxious, he had trouble sleeping, he was afraid to get on an airplane. I began to question myself, to wonder whether I was the right therapist for him. I began to be afraid I was doing more harm than good.”

She didn’t, however, have any doubts about the outlaws who populated the dreamer’s dreams. They could be found in one of Jung’s most

powerful archetypes: the Stranger or the Trickster, the outsider who streaks like a meteor across our individual and collective unconscious defying everything from the laws of decorum to the laws of gravity. As I sat there watching the analyst switch out the transparencies on the overhead projector I had one of those insights that come with such force that they bring tears.

I thought back in my own life to a time six or seven years ago when my conventional middle-class existence was coming to an end, though I didn’t know it yet. I thought 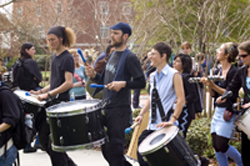 about the unlikely friendships I developed then with punk kids less than half my age, about the travelers and train hoppers and anarchists who had begun to fill my world. It puzzled me and worried me at the time, but I couldn’t contain my fascination with their lives; it seemed that they didn’t so much rebel as ignore convention altogether. When Isabell and Margaret moved beyond the margins of the known universe themselves—when they started hopping freight trains and sleeping in abandoned houses and eating out of dumpsters–my deep concern was mixed up with something I can only call envy.

And now listening to the analyst at the conference it suddenly made sense to me. If Jung is right, I was very much like the man whose dreams we were studying. Like him my range of emotions had narrowed, but instead of 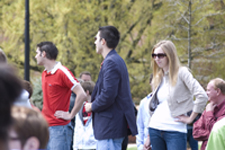 summoning the Tricksters in my dreams, I invited them into my real, actual, everyday waking life. And as I watched them walk through the invisible boundaries that I had thought were made of triple-tempered steel—walk through them as though they weren’t there—the margins of my own life stretched. I began to feel my own joys and my own sorrows, and after awhile I began to feel a part of the sorrows and the unquenchable joys of the whole world.

A couple of years ago I went to another conference, this one on anti-war activism. The speaker stood in front of an easel with one of those big flip pads. “Here’s how it works,” she said, and she wrote THE STATUS QUO in the lower corner of the paper. “The status quo is established and remains in place even if it’s not working very well; as time goes on people become invested in it and resist any attempts to change it. 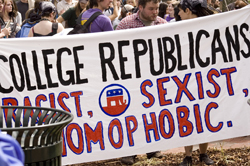 Until…” and she wrote NEW INFORMATION at the top of the paper with an arrow swooping down. “Until new information comes in that makes the status quo impossible to maintain.” She scribbled a confusion of spirals. “Chaos ensues and stays until a new status quo is established. This is true in our lives, in our organizations, and in the world, and we’re scared of it because it’s uncomfortable and unpredictable.” She turned back to the paper and tapped on the scribbles. “But this—this—is where the action is. This is the important place. Always look for the chaos, because that means something is happening.”

I spent the whole of my Jung weekend thinking about the Trickster archetype, and I’ve been thinking about it ever. I see now that the chaos-makers appeared in my life when I needed them, sometimes in unexpected and even unappealing disguises. Sometimes they were the people I loved most in the 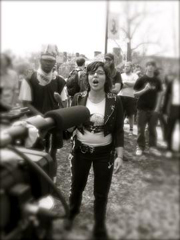 introduced me to parts of myself I didn’t know, or parts that had been buried so deep I forgot they were there. And something changed.

The world is stuck right now. A lot of people are unhappy, and a lot of the unhappiest people are the very ones who look to their neighbors to be successful, prosperous and secure. New information is washing in on all of us like a monsoon; the psychic effort to maintain the status quo has become almost unbearable. At the stress points where new information and the status quo meet, chaos begins. Chaos and police raids. But despite the chaos, despite the police raids, despite the Patriot Act, the Tricksters aren’t giving up. The outsiders and the strangers, the protesters, the gadflies and the pranksters are tremendously important. That’s where the action is.

The analyst gave us one last dream, a more recent dream than the others. A stranger rides into town on a motorcycle and all the townspeople 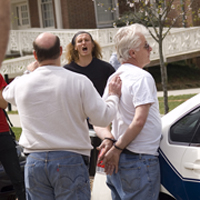 are afraid. They try to chase the motorcyclist away, but then someone runs up to say that a boy is hurt and needs his help. The stranger hurries over on his motorcycle—There’s been a guts spill someone says. The stranger picks up the boy and carries him to the hospital, where he is gently put back together again. “Notice that in this dream the dreamer is an observer, not a participant,” the analyst explained. “That doesn’t mean he’s absent, though. Quite the opposite, it means that he is present. This time he’s the stranger and he’s the little boy–the little boy who spilled his guts and needs to be put back together again. Something is beginning to change.”

The analyst smiled. “He’s a courageous man,” she said. “He’s stuck with it. The phobias and the obsessions have gone away again and he’s living a richer life than he was before. It’s still not always easy, but he’s determined to see it through.” 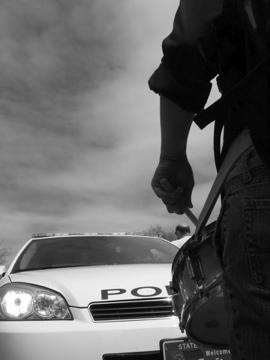 Filed under anarchism, the big picture